The first CASARA Zone to receive military SAR training under the umbrella of CASARA was Cochrane, ON. The 424 Transport and Rescue Squadron CASARA Liaison Team, with assistance from the CASARA Ontario Director, Mr. Mike Daniels conducted the training. The team spent Friday evening briefing the volunteers on SAR procedures and showing the Spotter briefing followed by spotter aerial training on a CC 115 Buffalo SAR aircraft on Saturday. The training was a great success, lessons were learned by both CASARA volunteers and the military. This training format was used in the years to follow to get the CASARA program up and running. 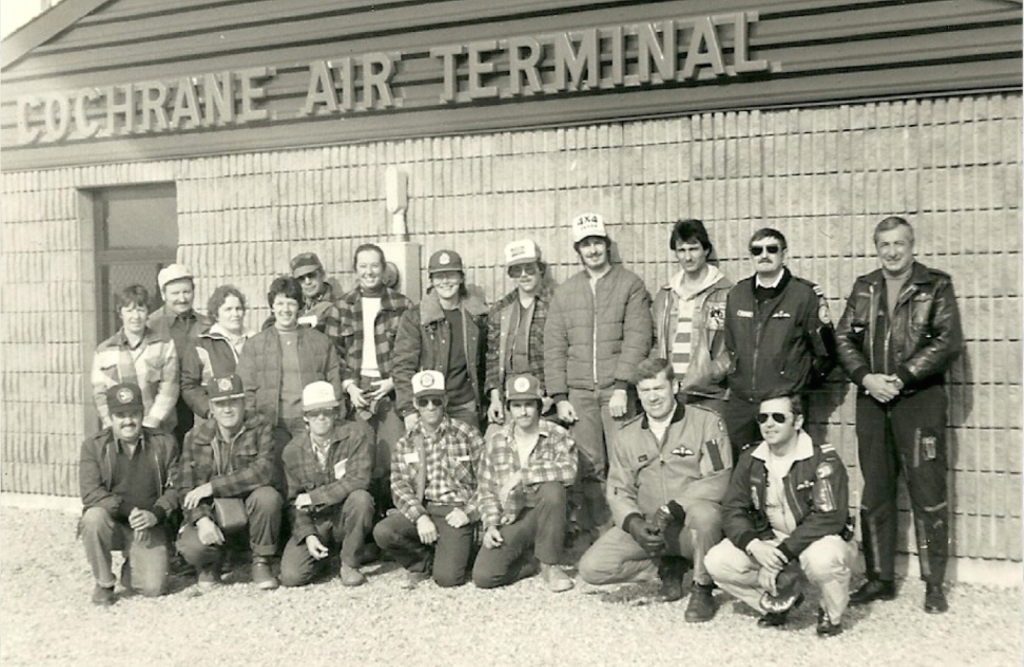 Cochrane, ON the first CASARA Zone to receive SAR training by the Military under the umbrella of CASARA. At the very right stands CASARA past president Mike Daniels.

FORMATION FLYING ON A CASARA AIRCRAFT

The picture below was taken around 1985 during CASARA training with an Ontario Zone. The training was covered by a local reporter and the photo along with the story was published in a Toronto newspaper. An Airforce General in Ottawa was alerted to the photo and immediately summoned the aircraft commander of the military Buffalo aircraft to his office. Military aircraft are not permitted to fly in formation with civilian aircraft.The aircraft commander reported to the General and explained that he was doing a simulated lost aircraft in the air exercise and was guiding the aircraft to the nearest airport. He also explained the Buffalo aircraft was much bigger that the CASARA aircraft which made it look like the two were close to each other. The explanation was accepted by the general so the aircraft commander was not disciplined or grounded for breaking any rules. 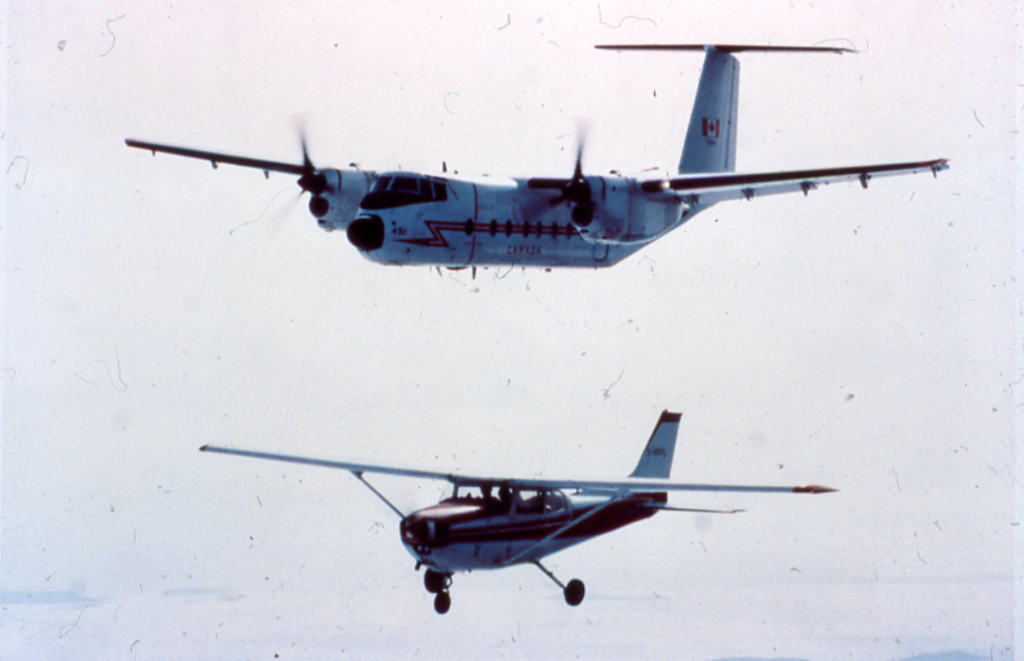 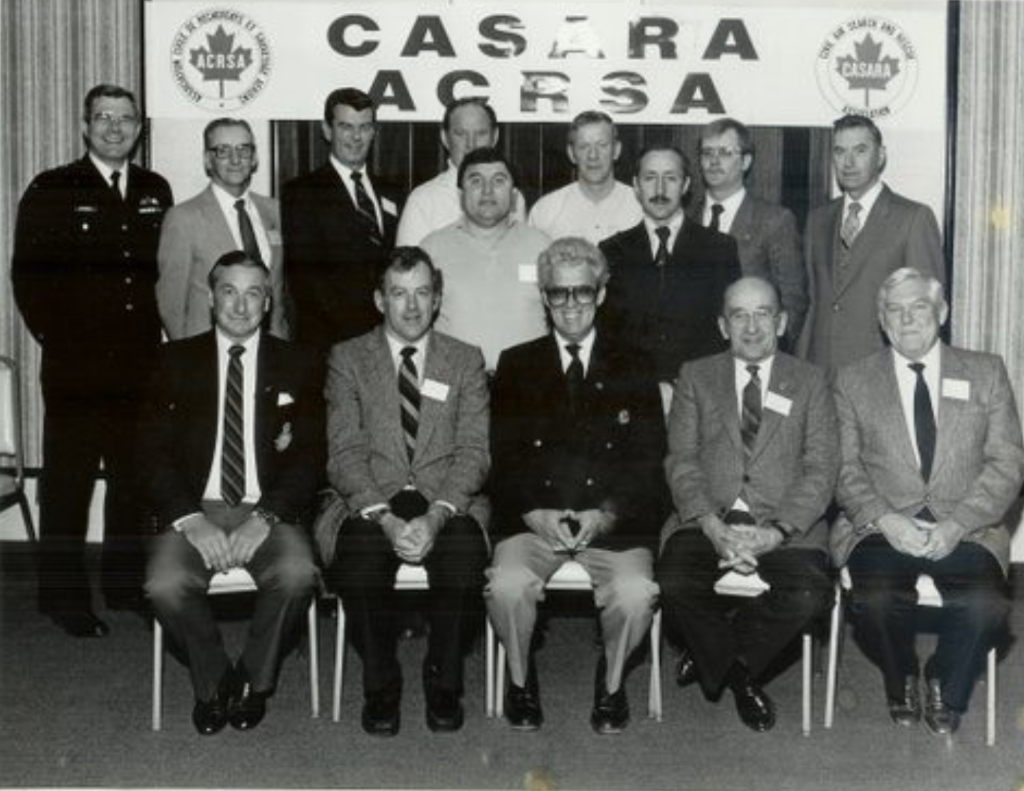 ULTIMATE SACRIFICE MADE BY CASARA MEMBERS

On June 6, 1986, pilot Kenneth Joseph Wolff and his passenger, respected wildlife biologist Orvall Pall, were killed when their aircraft crashed somewhere near Guinn's Pass in the Kananaskis region of southern Alberta.

Although the weather was terrible, a search and rescue effort was launched within hours. Volunteer searchers crisscrossed the area in small aircraft, by land vehicles and on foot.

The search continued for the two missing aircraft. Then on June 14, Rescue 807, a Royal Canadian Air Force Twin Otter from 418 Squadron, Edmonton arrived on-scene and began its search pattern. On board were RCAF aircrew members, Captain Wayne Plumbtree, Captain Ted Kates and Sergeant Brian Burkitt, and five Civil Air Search and Rescue Association (CASARA) spotters, Carl Grant, David Hall, Patricia MacLean, Charles Masur and Jerome Schindler. Captains Plumbtree and Kates were tasked into a mountainous area to search, and soon after, the unthinkable happened. Their aircraft flew into a large rock outcrop. All eight people on board died in the crash. A subsequent investigation showed that the pilots were most likely fooled by light conditions that visually blended 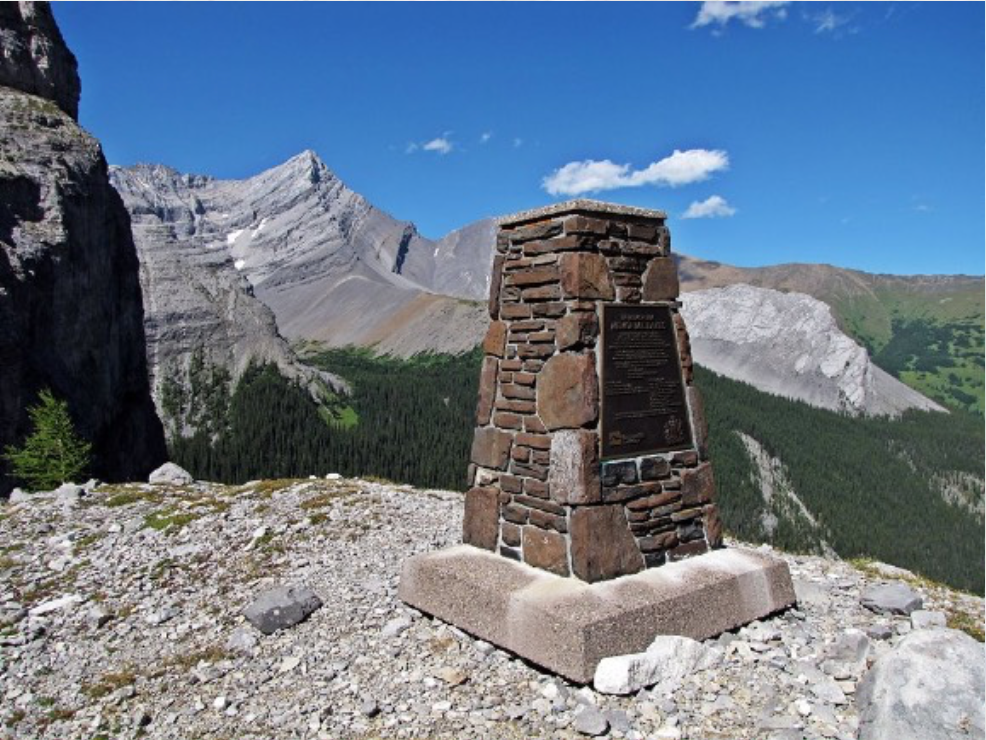 an outcrop of mountain into the mountainside behind it, and they did not see the outcrop until it was too late. On June 18, 1986, the wreckage of the first aircraft to crash, carrying Kenneth Wolff and Orvall Pall, was located just below Guinn’s Pass. Three months later, on September 27, 1986, a service was held by the Government of Alberta that named three lakes in the Kananaskis Valley the “Memorial Lakes” in honour of the 13 people who lost their lives during the tragic spring of 1986. A cairn with a bronze plaque stands just above the third and highest-altitude lake as a perpetual memorial.

CASARA GETS A NATIONAL OFFICE AT CANADIAN FORCES BASE (CFB) WINNIPEG

In April 1989, CASARA established a new National Office located at Canadian Forces Base (CFB) Winnipeg. The functions of administration and liaison previously handled by Air Operations at National Defence Headquarters, and financial management previously done by CASARA Liaison Officers were now the responsibility of the National Office.

The CASARA Board of Directors announced that Mr. Rob Kilborn, a retired Canadian Forces Navigator whose career included SAR missions and command of the Joint Rescue Coordination Centre (JRCC) Edmonton, Alberta would assume the position of CASARA National Administrator and be responsible for the new office.

The Winnipeg location was chosen because of its close proximity to Air Command which provides Department of National Defence (DND) coordination and financial liaison with Treasury Board. In addition, being near the geographic centre of the country, more timely communications with all the provincial/territorial organization was possible.

Appointing a National Administrator and establishing a National office represented a milestone in the development of CASARA becoming a self governing civilian SAR organization.

The first National office in 1989 was located in an old war time “H” hut style building until a new Air Command building was constructed just across the street. Air Command used the open office concept which meant individual offices were separated by a movable 4 inch wide padded wall. Everyone could hear what was being said by others as they went about doing their duties. There were about 60 of these individual cubicles in the operations area on the first floor of the building where the CASARA office was located. The higher in military rank, the bigger the office space you had. The CASARA office was very small, with a desk & chair, a filing cabinet, a computer and phone. One had to go to the other end of the building to send or receive a fax or to collect anything you printed using your computer. There was absolutely no storage space.